Pancake World – one of the world’s leading crepe and equipment wholesalers – has come up with a unique way to celebrate this Christmas season by spreading a bit of holiday cheer, and Candy Jar Films was there to help make it happen.

Embracing social media across various platforms including Vine, Twitter and Facebook, this South Wales firm has created a hilarious take on the Twelve Days of Christmas featuring pancakes and waffles.

Company owner, Loic Moinion, who operates from Llantwit Major in South Wales, has swapped spatulas and chocolate spread for tinsel and garish jumpers to get into the festive spirit. Originally from Breton in Northern France, the home of crepes, Loic settled in South Wales several years ago after falling in love with the scenery, friendly locals, and Welsh appreciation of good food.

He said: "I know pancakes aren't necessarily the thing one associates with Christmas, but I think there's room for some festive versions of crepes and waffles for that matter. It's definitely the time when we can indulge ourselves a little, and enjoy the kinds of foods we wouldn't eat so much of the rest of the year."

Pancake World has grown steadily over the last few years thanks to the proliferation of cafes and ice cream parlours that have responded to the demand for good coffee and indulgent treats. Crepes and Waffles are more popular than ever in Wales and Loic has been working flat out to serve the needs of his customers. 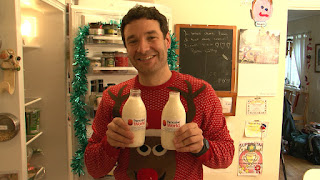 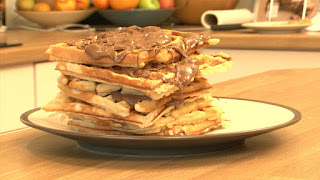 In the New Year Pancake World is setting up the first Creperie Training Kitchen in the UK, with the hope of assisting new or existing owners to either or perfect their crepe making or barista skills. Loic continued: “We’ve been inundated with requests from people to improve their skills. We had no idea that this was not being offered and decided to step up to the mike, and invite them to our new training studio in Llantwit Major. If this works we hope to roll it out across the country.”

While Loic isn't expecting to reach the coveted No 1 Christmas slot with this video, he hopes people will enjoy his interpretation of a festive musical staple. "It's just a bit of fun, and if my customers or anyone else enjoys it, I'll be a happy Frenchman!"

Candy Jar Films is a video production company based in Cardiff. Check out our website here: www.candyjarfilms.co.uk
Posted by Candy Jar Films at 11:39